Fire pits are a great addition to any garden to provide a focal point and also a source of warmth. However, if there’s a touch of rain in the air or it’s very bright you may wish to have some form of shade.

One question that comes up a lot is Can You Use A Fire Pit Under a Gazebo?

You can use a fire pit under a gazebo as long as you take certain precautions. You should never use a fire pit in an enclosed space without sufficient ventilation. Even open-sided gazebos could be a significant risk if you don’t follow the following safety suggestions.

You’ll find lots of answers on the internet where people simply say yes or no but as with all things in life, the real answer is a little more complicated and a combination of both.

Below we’ll give you a little more information about the different types of gazebos, materials and fire pits that will help you make an informed decision.

What is a Gazebo?

A gazebo is a free-standing garden structure that protects you from the sun or the rain. They are often made from wood or metal with fabric, wood or metal roofs. They can also come with sides to fully enclose the structure.

Using a Gazebo With a Fire Pit Inside

There are many things you need to consider if you’re thinking of using a gazebo with a fire pit inside. These include:

The first thing to look at if you’re thinking about using a fire pit inside a gazebo is ventilation.

Now we’ve already stated that you should NEVER use a fire pit inside an enclosed space and this includes a gazebo with sides. Even with one or more sides removed, it will still cause a significant risk for a number of reasons.

One thing that people often tend to forget is that the size of your gazebo is very important in both its height, width, and length.

Starting off with the height, if your gazebo is not tall enough you’ll find that the smoke will very quickly discolour the underneath of the roof material.

In regards to the width and length, you’ll need to make sure that there is enough space surrounding the gazebo to fit the fire pit and any furniture taking care to have an appropriate space surrounding it. The space required is down to your fire pit manufacturer but as an average rule of thumb, most suggest 2-3 ft minimum.

Gazebos come in a whole variety of different materials and as we know wood burning fire pits can cause sparks and embers to fly depending upon your fuel.

Each type of material has its drawbacks, metal can get hot, vinyl and plastic can crack and wood and fabric can easily catch fire so it’s important to think about materials when you buy a gazebo.

If you’re finding all of this a little complicated then why not take the stress out of it all by getting a BBQ grill gazebo. Obviously, you’ll need to make sure your fire pit and furniture fit but they’re a great alternative to a standard gazebo.

What is a BBQ Grill Gazebo?

BBQ Grill gazebos are specifically designed for BBQs and will also suit many fire pits. They are often made from powder-coated steel frames with fire retardant material as the canopy. They also do not have sides but have a handy ventilation gap at the top of the canopy which allows smoke and fumes to escape.

Below we’ve featured 4 of the best BBQ grill gazebos on the market in 2021. 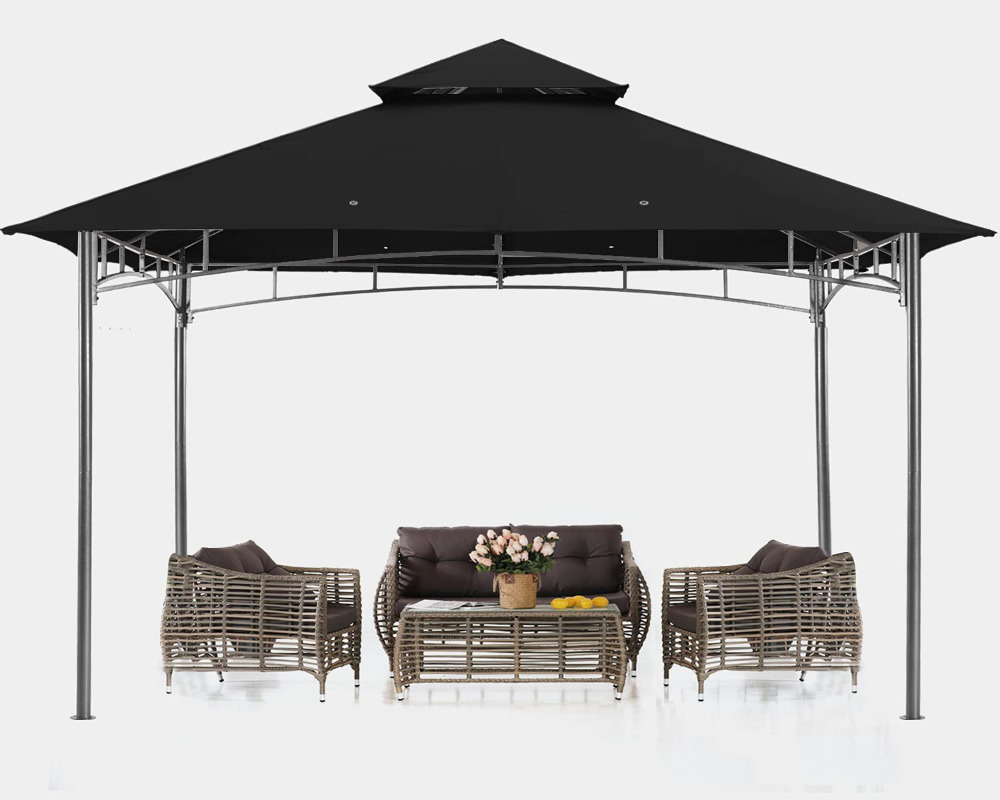 This ABCCANOPY has a high-grade steel and powder-coated frame to help to prevent rust and for extra durability.

It has a modern design with clean, precise lines and is an ideal modern shelter for your outdoor space. Providing plenty of shade, the fabric is water-resistant with a two-tier weather-resistant polyester roof that provides stability in windy conditions.

The gazebo cover material is UPF 50+ protected, and US Standard fire-retardant and the added vents allow both air circulation and smoke to exit. Specified as being good for BBQs and grills this gazebo should also be good for fire pits when safety advice is followed. 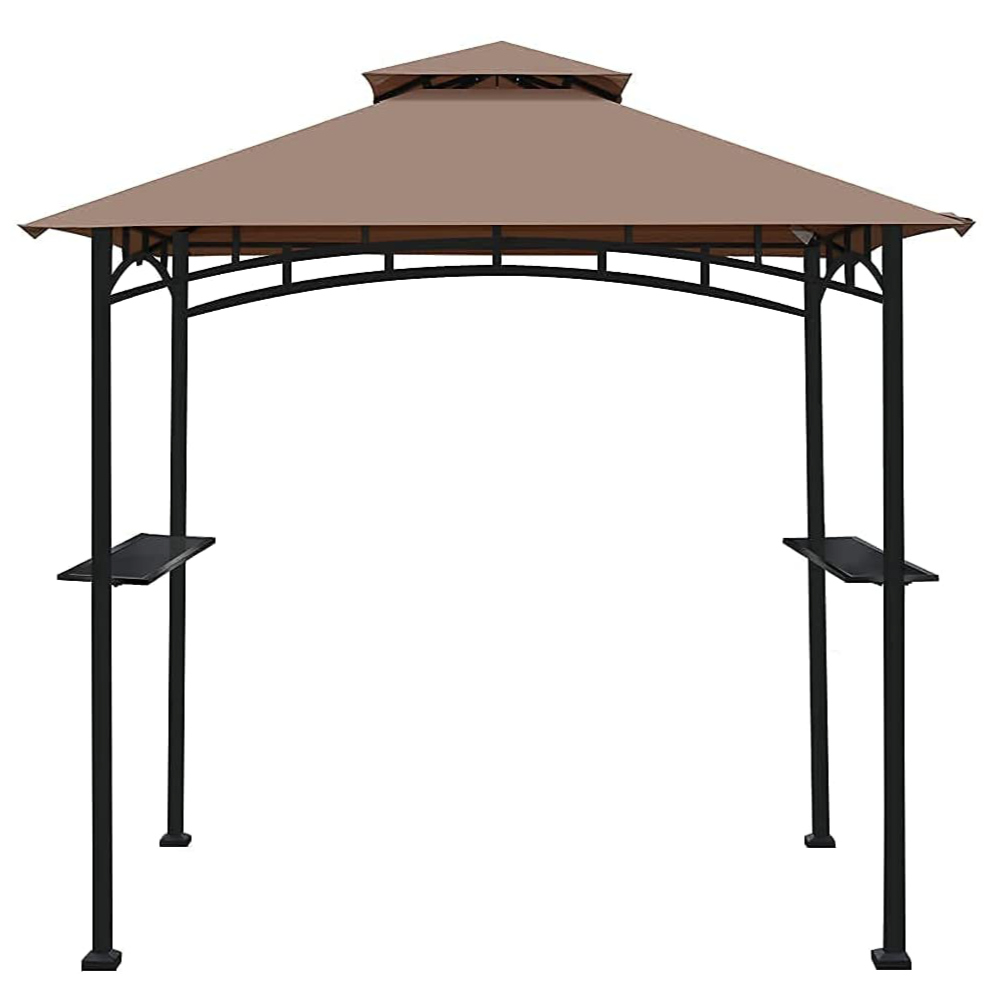 The bigzilla BBQ Gazebo has a heavy stainless steel frame that is coated with an anti-rust and anti-corrosion coating to help protect it from the elements.

It’s easy to assemble with a fabric roof that is UV resistant, water-resistant and fire-resistant. Please note however that although the roof is fire resistant it is not fireproof and should therefore be kept away from direct flames.

Offering plenty of space, the shelves are perfect for holding drinks and snacks whilst the roof has plenty of ventilation to help the smoke escape.

Slightly smaller than the ABCCANOPY, the bigzilla is about 8ft x 5ft and 8ft tall. 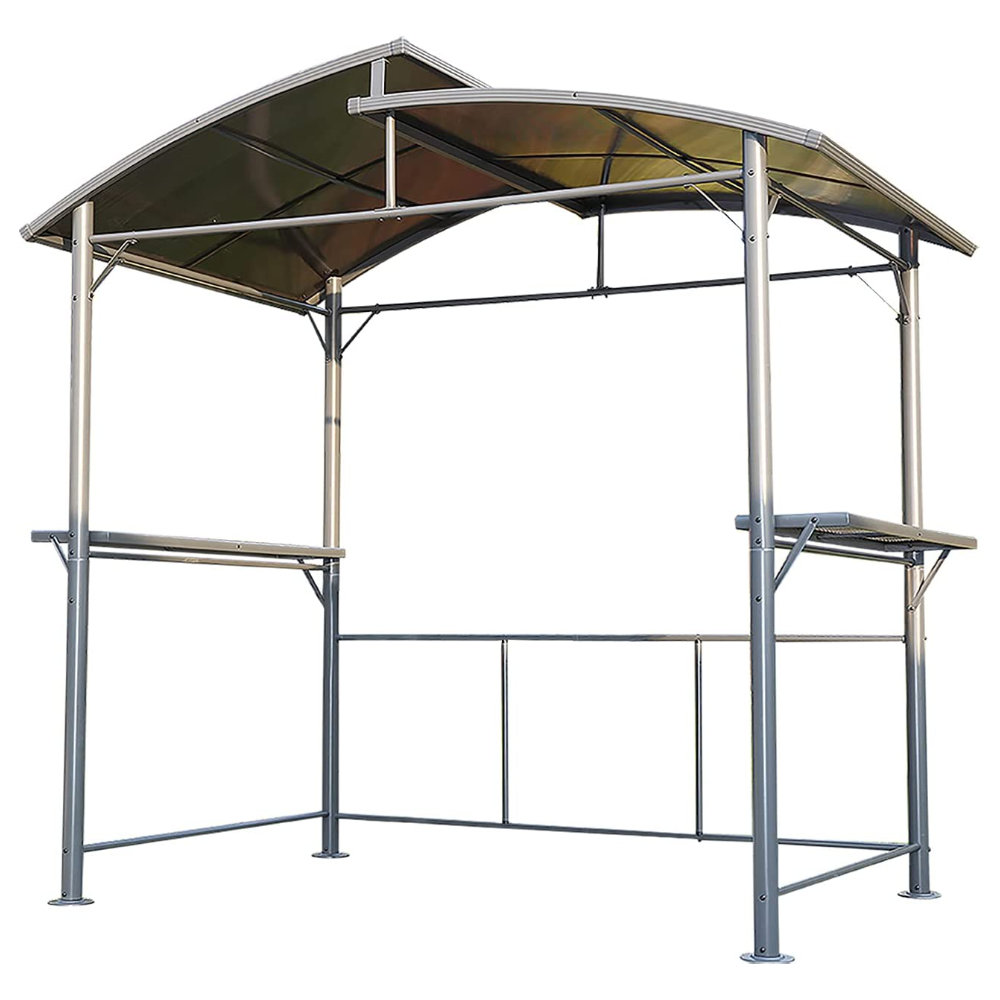 The Angel Living BBQ Patio Gazebo is a modern design that’s different from others we’ve featured. Made from iron and aluminium, this BBQ shelter has a powder-coated frame to protect it from the elements and a two-piece, solid curved roof that offers plenty of ventilation whilst offering protection from the sun and rain.

You’ll find that the frame also features two side shelves, that are perfect for use as a bar or serving during parties. 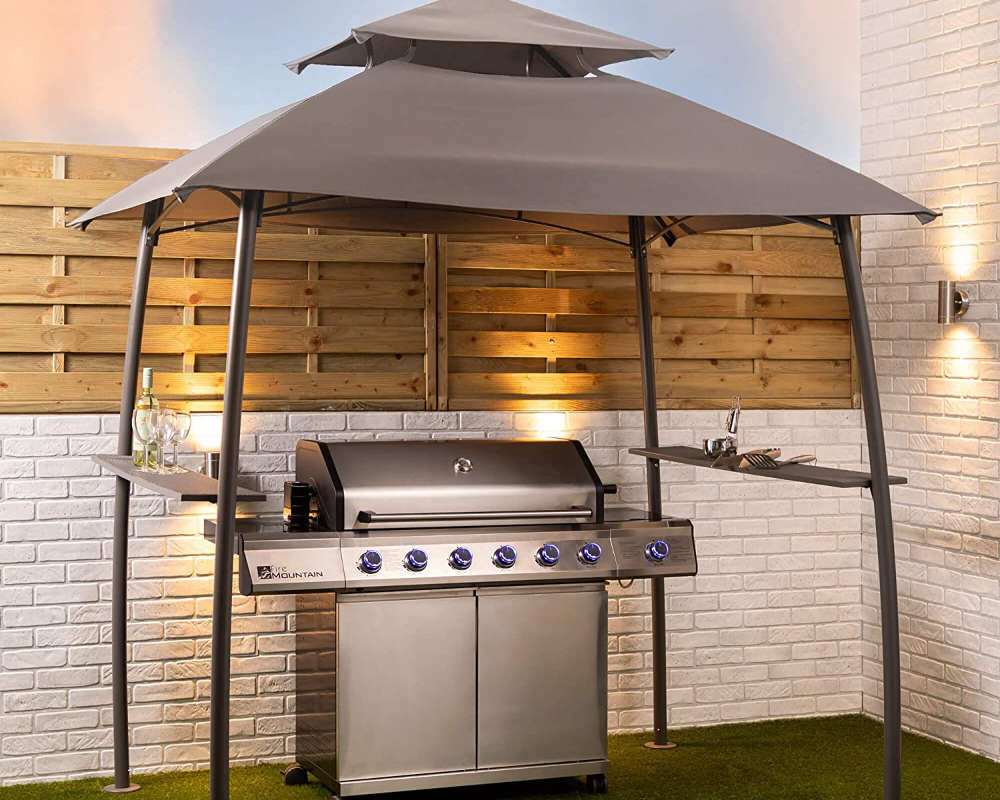 The Alfresia BBQ Grill Gazebo is a rather stylish and contemporary shelter that’s perfect for a garden party.

A sturdy and wide based powder coated steel frame will ensure that the gazebo is very stable. Meanwhile the fabric canopy helps to protect against UV rays and rain. The canopy also offers plenty of ventialtion through its two tier design.

Easy to install, the gazebo can be constructed very quickly and easily packed away during winter months. Pefect for gatherings, the gazebo has handy side shelves for holding drinks so you can get the most of your garden all year round!

What is the Best Fire Pit to Use Under a Gazebo?

You have two main options when it comes to fire pits, you can use a wood-burning fire pit or a gas fire pit.

Each has its own advantages and disadvantages so let’s look at them each in turn.

A wood-burning fire pit is much cheaper than the gas alternative and there’s nothing better than looking at an open flame and the smell of wood-burning in a fire.

The main problem with a wood-burning fire pit under a gazebo is that they produce hot sparks and embers which unless managed can easily set fire to a gazebo. You’ll also find that you can reduce the amount of smoke by burning the fuel for a fire pit, however, they do still produce smoke which can damage the gazebo and more importantly yourself.

The only downsides of a gas fire pit are the ambiance they provide and also the fact they cost more to buy.

Many people use a fire pit under a gazebo without any problems each and every year by following simple safety rules including:

If after all of this you still want a gazebo but don’t want a fire pit underneath, then consider alternative types of patio heater such as infrared heaters or electric heaters.